Linking up with Rosie and the rest!

As much as I wished I could keep up with blogging during nap time/slowly typing one handed while feeding…that’s just not our life right now. So, six weeks later, here we are! 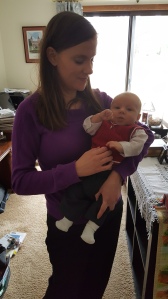 I’m in a sweater from INC, I think, and black pants from New York and Company. They fit like they did pre-Aslan, which is to say, I needed a belly band form Target. But since I have slight abdominal muscle separation, I’m not to do crunches. Oh well.

Aslan is in a “Christmas” outfit from Koala Kids. He did wear it for Christmas Mass, and it was HUGE on him at 9 lbs.  The newborn dress shirt was stretching across his linebacker chest too much, so that’s going in the storage bin after a wash. But he’s still swimming in the pants! Baby clothes sizing is ridiculous.

Of course I have things to say about things in the world, but for now, just going to sign off until the next quiet time.

7 thoughts on “My Sunday Best”

The Brain Behind the Blog

The Proverbial Girlfriend is a thirty-something Catholic woman. While she does not have a theology degree, her very Catholic bookshelf helps form her thoughts and opinions. Grab a proverbial cup of tea and enter in the conversation: proverbialgirlfriend@gmail.com